For fear conditioning and startle reflex

The StartFear Combined system is a polyvalent system for conducting both fear conditioning and startle reflex experiments in one same enclosure, regardless the animal is a rat or a mouse (from 15grs to 300 grs. or more depending on the use or not of a restrainer).

Basically, the StartFear system allows recording and analysis of the signal generated by the animal movement through a high sensitivity Weight Transducer system.

The analogical signal is transmitted to the FREEZING and STARTLE software modules through the load cell unit for recording purposes and posterior analysis in terms of activity/immobility (FREEZING) or startle response characterization (STARTLE).

An additional interface associated with corresponding hardware allows controlling the stimuli (light, sounds, shock, air puff) from the STARTLE and FREEZING modules of the PACKWIN software (PACKWINCSST and PACKWINCSFR, respectively).

The StartFear cage is made with black methacrylate walls and a transparent front door. In fear conditioning experiment, the walls, cover and floor can be of different materials or colours. Moreover, a transparent cylinder can be placed into the experimental chamber in order to modify the contextual spatial perception of the subject during the test phase.

*When used for Startle or Fear conditioning applications (PACKWINCSST and PACKWINCSFR), the use of specific models of HP computer is mandatory due to sound card and PC performance requirements.
Contact our technical support team for any confirmation about the current HP model specifications.

Holders size (Only for Startle experiments)

* The sound calibration requires a soundmeter (see the Options table for our recommendation).

Holders (Only for Startle experiments)

* the correspondance between the holder model and animal weight is given as an approximation - check the size of the holder in order to confirm the one needed for your experiments.

* Please check the specification tab about the PC models that should be used with this software, especially for startle and fear conditioning experiments. 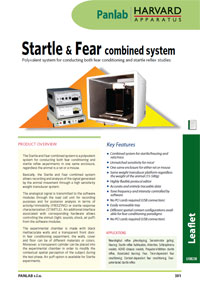