for screening anxiolytic effects of drugs

The Vogel test is a conflict test has become a standard for fast screening the potential anxiolytic properties of drugs. In this procedure, the drinking behavior is punished by mild electrical shocks leading to a significant reduction of water consumption in deprived animals. Drinking responses are then reestablished by drugs with anxiolytic properties.

The Panlab Vogel test consists of a standard home cage associated with a grid floor. An electronic unit associated with a special nipple ensures the detection and counting of the licks reflecting the animal drinking behavior. Using an exclusive nipple design, any casual and non-specific contacts of the animal with the nipple will not be considered as a drinking response.

A multi-cage configuration allows performing the Vogel test for up to 32 cages. The cages are associated with a link box (1 for each 8 cages) ensuring the functional interaction between the lick sensor system, the LE10025 Shock generator (1 per cage) and the PackWin software for advanced protocol configuration and data acquisition.

The interconnection among the cages and the computer is carry out by a RS 232 serial communication. Such a configuration allows performing the test on a Laptop. 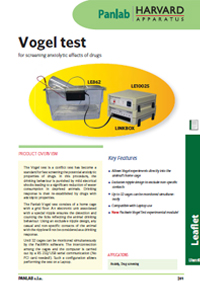