For attention performance in rodents

The Panlab 5/9 holes box is composed by a test chamber, food or drink dispenser, a Link Box to connect it to the PC and the PackWin software. The particularity of the Panlab box is that 9 holes positions are available for the test providing an higher protocol flexibility: different number of holes used, different degrees of test difficulty.

The 5/9 holes box is assembled with black aluminium walls and a transparent front door. The box is equipped with an arc of 9 contiguous apertures set into the rear wall, a house light, a food pellet dispenser and photobeams to detect the nose-pokes into the food holder. The holes not used in the experiment may be blocked up using a metal insert. Each hole is equipped with photocell beams and internal LED providing visual cues specific to each hole. The intensity of the LED can be adjusted in Link Box using the digital selector. The box is placed on a stainless-steel platform and the associated tray is easily removable to clean animal excrements.

Option for using a Rat Cage for Mouse Tests 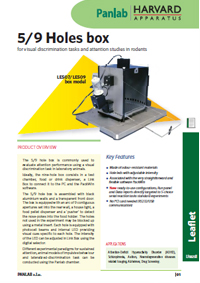